Experience a calming and restoring atmosphere at one of our many spas. Choose from a historic Roman Bathhouse to contemporary spas offering massage, facials, pedicures, and more. With several spa options to choose from, you’ll be leaving refreshed and restored. 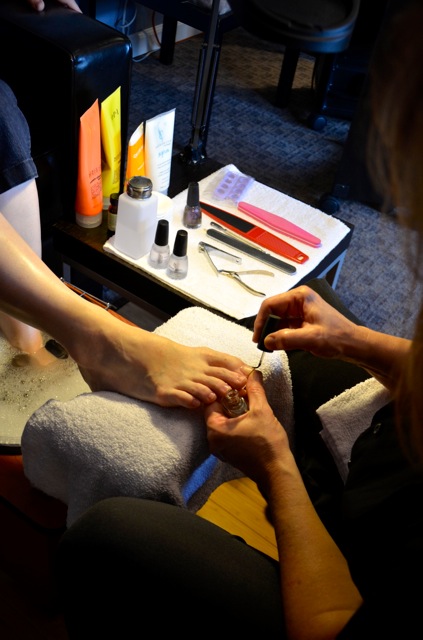 While Berkeley Springs honestly earns its title as the country’s first spa from a historical perspective, it has to work to keep a top position on the contemporary spa circuit. And that means encouraging massage therapists to learn and use new techniques.

When there are more than 55 different spa treatments available among the spas of Berkeley Springs, it’s hard to know what to choose.  Here are some impressionistic descriptions by our “official” spa tester and author, Jeanne Mozier, to help inform your decision.

Hot and cold stones, black and white, shaped marble and sleek basalt are the key ingredients of a body therapy called LaStone, developed by Arizona-based Mary Hannigan less than a decade ago. Although the use of heated stones for healing is ancient, Harrigan modernized the process, integrated it into standard massage therapy and created a technique that could be branded and taught. Packaging is the key concept here.

Let me attest to its effectiveness. Getting stoned in Berkeley Springs works. Not only is it relaxing and induces a level of giddiness that usually accompanies the illegal process (which is totally unrelated to La Stone) but it’s good for the massage therapist. You can imagine how tough all that kneading and poking is on a therapist’s hands and wrists. In this technique, the stones do some of the heavy work as well as transmitting their healing warmth back to the user as well as forward to the receiver.

One practitioner used a set of 54 stones of varying shapes and sizes, each with a different purpose. There are toe stones which are tiny enough to fit between your toes. There are large and solid tummy stones. And there are spinal alignment stones.  I was told to sit up while she arranged the black stones on the table in a double line then eased me back down on top of them. Carefully selecting each stone from its warm bath, she placed additional ones on the various chakra points, locations on the body believed to be centers of whirling life force.

While working on my torso, the stones were placed on the sheet over my skin, with the practitioner carefully checking with me as to the degree of heat. “Is that too hot?” she asked placing a stone on my forehead, in the palms of my hands, on the soles of my feet. It never was too hot.

The stones are volcanic in origin and collected from various places. They are purchased as a set although some practitioners collect their own. There is ritual involved in their care; they need a lot of labor as pet rocks never did. The stones are cleaned daily. They must be warmed ahead of time. They require recharging which means putting them out in the sun, preferably in contact with the earth so they can gather energy. “Setting them out during thunderstorms is an especially good time,” said my masseur. The theory is that the stones have inherent energy that is released into the person on whom they are used.

While one practitioner did subtle energy work, a second did a more physical massage with the stones to head smacking effect.  I actually felt dazed when finished. He used cold stones along with the hot for an invigorating effect. There is nothing for release like a slab of white marble taken directly from a cooler packed with ice and placed on a tight shoulder that just had hot rocks worked into the tension points. “Cold stones get the blood pumping” said the masseur. In other circumstances, this could be considered cruel and unusual punishment. Laying on a massage table with stringed music in the background, it’s a cutting edge health treatment for which clients are clamoring at a cost slightly higher than the standard massage.

Stones are useful to do deeper work releasing tension points and loosening myofascia — the sheath of tissue that covers muscles.

During the active massage part of the treatment, both bodyworkers used the stones as if they were an extra pair of hands; and it was difficult to tell the difference from my point of feel. “Very tight areas immediately suck heat from the stones,”  said one as stones were switched.

One day, I yielded to the pleas of Atasia Spa’s owner, master bodyworker Frankie Tan, and tried an addition to the menu. The rest of the day, people would turn their heads and sniff the air as I passed. Tentative smiles lit their faces. I knew they had visions of sugar plums dancing in their heads. I knew because I could smell it too — the sweet aroma of sugar lingered on my arms and legs.

Once sugar made its entry onto the spa circuit, it became a hot item. I could understand why. Who wouldn’t to smell like a kitchen of just baked sugar cookies?  Most of the body treatments that arrived in Berkeley Springs, hotbed of the latest in spa services, were imaginable from their names. I was not surprised to be slathered in mud during the mud wrap or to have hot black rocks placed on key points of my body during a La Stone massage. It was hard to fathom how the sugar scrub could be what its name suggested, but it was. With the exfoliating treatment completed, I hurried home, stuck out my arm and announced to my husband: “lick me, I’m sweet.”

Tan designed a special room in his Asian-flavored spa for the treatments that require hosing down afterwards like the mud wrap and sugar scrub. It is outfitted with heat lamps and hoses and includes a uniquely constructed table with side gutters to allow the water and other fluids to drain easily.

Laying me on the table, the practitioner started with one leg and then the other. She lubricated each body part with a slick fluid moisturizer that flowed from a hose then scrubbed it with liquid sugar that held enough grains to make working on my back the best scratching I had ever experienced. “Even with brushes, it’s hard to get some places on your back,” she said, accurately interpreting my sighs of relief.

Once the sugar was applied, I was buffed up with a loofah mitten and all that dead skin removed leaving behind the alluring aroma. Finally each body part was rinsed off with the mineral spring water for which Berkeley Springs has been famous for centuries.

I could scarcely believe how smooth and silky my arm felt. No sticky residue. No glaze. My skin was baby soft and smelled of Mother Nature’s most enticing product — sugar.

In 1768, Thomas Lord Fairfax and George Washington often spent time in Fairfax’s bathhouse soaking in the healing waters of the warm springs now known as Berkeley.  What would they think about life in their favorite spa town today?

Based on years of sampling treatments in Berkeley Springs, here’s what I would tell George and Tom should they ask about spas.

Start in the traditional way by “taking the waters.”  There are contemporary whirlpool tubs at Atasia Spa and the newly renovated main bathhouse at Berkeley Springs State Park.  My personal favorite, however, is the most traditional – the Roman bath.  There are Roman baths in the main bathhouse but the ultimate is the historic Roman Bath House dating to 1815 with nine private bathing chambers each holding a walk-in tub filled with 750 heated gallons of mineral water from the springs.  Whole Asian families share a bath.  Psoriasis sufferers claim the waters help.  After a 12-mile hike along the top of Cacapon Mountain, I rushed to soak in a bath to assure I’d be able to move the next day – and it worked.

Scrubs, rubs and wraps are primarily targeted to skin.  You come out soft and depending on which you choose, smelling or tasting like a giant sugar cookie.  Wraps like mud, detox and absorb impurities but do not necessarily lend themselves to after-treatment licking.

At The Renaissance Spa, in The Country Inn, they offer the alluring Moroccan Incense Body Ritual which I decided to try.  First came a scrub of fig extract and Turkish coffee on hands, arms, back and legs.   Warm towels then removed dry skin.  A masque of spice, pomegranate and yogurt was brushed on and I was wrapped like a mummy in cloth sheets, a plastic sheet, space blanket and wool blanket to contain the  body heat.  Once I was unwrapped, the cosmetologist applied Moroccan incense massage oil for circulation.

On any given day, facials are requested as much as massage and they are no longer “just for girls.”  Men now make up more than 30% of all facial customers in Berkeley Springs.  According to the practitioner at Atasia who gave me my first facial recently: “The men come in all manly man for their first facial saying they don’t usually do this and leave planning to tell all their friends.”  It’s no wonder.  As she said: “it’s so much more than just a facial.”

Facials at Atasia are given on a heated massage table hand built by owner and master masseur Frankie Tan.  The practitioner started by putting my feet in heated booties then did a deep cleansing using a clarisonic brush.  Hot towels followed.  Next came exfoliation and a facial massage followed by purified water steam and more hot towels soaked, of course, in famous Berkeley Springs water.  While the facial masque was working its magic on my skin, she did a hand, arm and shoulder massage using hot stones.  More warm towels to take off the masque then moisturizer applied.  I returned to earth as she was taking off my hot booties – “wait, wait.  Don’t I get to have these on forever?” I cried.

Massages in Berkeley Springs come in all types – more than two dozen at last count from Frankie Tan’s authentic Thai massage at his Atasia Spa to the popular couples massage at both Atasia and Renaissance.  At Rita Renee’s aromatouch massage uses essential oils, this massage stimulates your senses to boost your body and motivate the mind.

Sage Moon Healing Center is a collective of individual practitioners that offers everything from reflexology to advanced reiki to Bobbie Rohn’s magical Cyma Sound Therapy which cured me of six weeks of pain in less than 24 hours.

Every day is a spa feast in Berkeley Springs and the spas are easy to find, collected in a couple blocks around the springs.    You can pick and choose among the various spa offerings or take the easy way and get spa packages. During the month of January we celebrate the spas with special discounts and activities that highlight why Berkeley Springs is still going strong as the country’s first spa.

Glassy eyed with wonder at what their rustic springs were to become, Tom and George asked the obvious: can you hand us a towel?