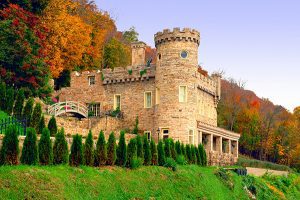 When Mother Nature marks a place with special favor as happened with the warm mineral waters of Berkeley Springs, oddities and legends are often part of the pattern.  So it is with Berkeley Springs, center of the universe.

Berkeley Springs is a town with two names. There’s the Post Office name — Berkeley Springs — that the world knows, plus Bath, the name given by George Washington and his cronies when they formed a town around the springs in 1776. Bath is still the official name of the tiny municipality that surrounds the warm mineral springs as well as the Historic District established in 2009.  Berkeley Springs is a postal address and a state of mind.

The mineral springs flow unceasingly at 74°F and at least 1000 gallons per minute. Their mineral content includes sulfates, nitrates, and carbonates. Although there has been much speculation over the centuries, no one actually knows the source of the water – only its destination in the small block along the base of Warm Springs Ridge in Berkeley Springs State Park.

During the final decades of the 18th century, Bath was attacked as a “seat of sin” by traveling preachers because of its gambling, quarter-horse racing and general partying.

The most appealing oddity in town is also the most memorable.  Perched atop Warm Springs Ridge, overlooking the park and town is the sandstone wonder of Berkeley Castle.

In 1885, Colonel Samuel Taylor Suit of Maryland began “laying the foundation of his cottage,” according to the local News, on a lot along Warm Springs Ridge that he purchased from H.H. Boyd.  It was part of the original Fruit Hill Farm owned before the Civil War by John Strother of the Berkeley Springs Hotel.  Two years earlier, Suit had married Rosa Pelham, daughter of an Alabama Congressman and 30 years his junior.  Work progressed on what the newspaper called “one of the finest residences in the state,” and it was occupied by Suit, Rosa and their three young children in late August 1887.  It was one of more than two dozen splendid structures in the chic “cottage” community of Berkeley Springs.

The first description of Suit’s cottage as a castle was made in the local Mercury in 1886 when it was described while under construction as “giving one the impression of a handsome castle nestled among the rocks and cluffs of the mountain.”

The description was repeated again in the April 5, 1888 edition of the Martinsburg Independent: “The residence of Mr. S.T. Suit on the side of Warm Springs Ridge is a novelty in this section and strikingly handsome.  It is of stone and a regular castle in appearance.”  It has remained know as the Castle ever since. 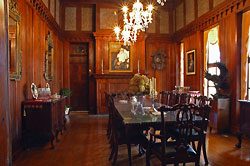 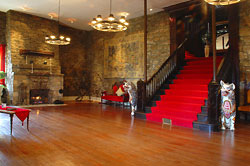 By September 1888, after a brief illness, Suit was dead.  According to his local obituary, Suit was “a leading Republican in Prince George’s County who served in the Maryland Legislature.  He was for some time extensively engaged in the liquor business and was connected with the Washington City and Point Lookout Railroad Company.”  Suit’s popular whiskey was marketed nationally in little brown jugs.

A year later, Rosa’s castle was under siege by local hooligans.  “Robert Roach and Champ Miller broke the window of Colonel S.T.Suit’s stone castle on Warm Springs Mountain and stole two cases of wine.  Some was taken to Joshua Barney’s for a big dance Friday night,” reported the News. By fall, Rosa was throwing her own parties and a report of an October ball said: “Her beautiful residence was illuminated from base to turret with innumerable Chinese lanterns and the terraces were ablaze with beacon fires. The immense hall was decorated with shields and handsome engravings set in masses of evergreens and fall flowers.”  There was dancing to a coronet band and then a march to the supper room at 11:30pm “for a bountiful repast.”  The ball closed with a Virginia Reel.

Throughout the 1890s, Rosa’s many comings and goings from Washington to Berkeley Springs and back were faithfully reported in the local paper along with her wardrobe and descriptions of more parties including several in 1893 at which Professor Anton Kaspar’s Bohemian orchestra performed.  They were favorite performers at the summer season of the Berkeley Springs Hotel during the 1890s.  During much of her party phase, local gossip had Rosa engaged in an ongoing romance with Malcolm Crichton, accomplished horseman and owner of Ravenswood, a large estate that extended from today’s Rockwell Circle to WV9 east. 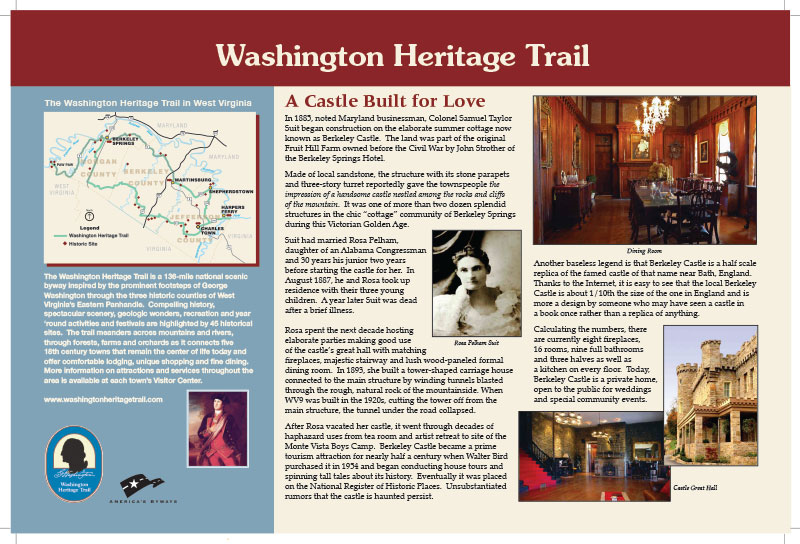 Please click on the image above for a .pdf of this interpretive sign on this section of the trail.

By 1895, water and electricity were put in the Castle.  Rosa and the children lived there that winter although monthly trips to Washington were reported.  Soon after, financial difficulties and lawsuits were plaguing Rosa and in 1898, she began renting out the Castle.  First residents were C.P. Jack and family, driven from their home in the Berkeley Springs Hotel when it burned.  Two years later, Rosa was reported in town for a day or two renting “the Suit property known as the Castle to C.W. Johnson who will shortly move into it.”  By 1902, the Castle was initially reported to be rented for the summer to New York millionaire, Howard Gould.  In fact, the rental report was discovered to be “an advertising dodge to bring Berkeley into the public eye and to attract attention to several projects looking to Berkeley’s development.”

Whatever was occurring at her Castle that year, Rosa was not there.  In May, she was building a small house for the summer at Kesecker’s Ford on Sleepy Creek, halfway between Berkeley Springs and Hedgesville. Her children were there with her.

A 1904 advertisement has M.S.Mahan offering lodging and meals at the Castle. Auction sales of the Castle were announced more than once and in 1916, it was sold to the Bank of Morgan County.  After being offered and withdrawn from sale several times in 1923, local businessman, George Cunningham, finally bought it and retained ownership through 1938.  Initially, Cunningham gave up his lease on the Dunn Hotel and claimed he would expand the Castle and operate it as a hotel. Other than a brief stint as a lodging place in 1932, there is no indication this ever happened.  Instead, the Castle became the site of a variety of uses including Pasttime Club dances in 1924, a shop and retreat for arists and writers in 1929, and Friday night dances as the “Old Castle Club” in 1936.  Ward Kesecker bought the property from Cunningham and did extensive repairs eventually building the existing two-story addition in the rear.  During the Kesecker years, the Castle served as site of a two-week antique and hobby fair in 1939 and as base for the Monte Vista Boys Camp.

Berkeley Castle became a prime tourist attraction for nearly half a century when Walter Bird purchased it in 1954 and began conducting house tours and spinning tall tales about its history.  Eventually, it was placed on the National Register of Historic Places. Most of the overblown stories were created for the tours.

Built of local stone, the castle has 13 rooms plus a basement dungeon, which was popular during ghost tours. The Great Hall has a high ceiling, hardwood floor and stone fireplaces at each end. A pine-paneled dining room on the main floor also has a fireplace. A wide stairway curves up to second floor bedrooms and a paneled library. A narrow staircase leads to the turreted rooftop trimmed with battlements and offering a fabulous view of the town. Three crosses are sunk into the stone walls of the turret.

SR9 now cuts through the castle property; a stone gatetower is stranded on the opposite side of the highway.